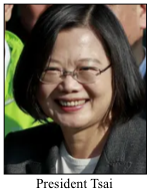 Last Saturday the Taiwanese re-elected President Tsai Ing-Wen. Tsai won more votes than any presidential candidate since Taiwan began holding direct elections for president in 1996. Her party also maintained a majority in the legislature. The landslide was not only a strong voice of support for the incumbent, but an equally strong rebuke of China, and specifically for the Communist Party. Tsai campaigned against unification while her main opponent backed closer ties with the mainland.

In her victory speech, Tsai declared, "This election is about whether or not we choose freedom and democracy. We must work to keep our country safe and defend our sovereignty." She didn't need to explain who they were defending their sovereignty against. China, which persists in claiming that Taiwan is part of the mainland, has been desperately employing both carrot and stick to encourage the Taiwanese to return to the fold. Mostly stick. Twice it sailed its new aircraft carrier through the Taiwan strait in the run-up to the election, and former paramount leader Hu Jintao has said Beijing would not rule out the use of force to bring Taiwan to heel. The intimidation didn't work.

China has little to offer but brute force to bring Taiwan onside. Economically, Taiwan is miles ahead with a GDP per capita over double that of China's. China has consistently achieved double-digit growth over the last 25 years, yet Taiwan remains well ahead despite economic restrictions imposed by its neighbour. One might expect at least a more equitable distribution of wealth in the communist country, but such is not the case. Inequality is much lower in Taiwan. Taiwan also provides better social infrastructure, including health care, with one-quarter China's infant mortality and five extra years of life expectancy. Not surprisingly, China's offer of the "one-country, two-systems" principle for unification, à la Hong Kong, falls on deaf ears. The Taiwanese have seen how well that works.


Last November, pro-democracy candidates won overwhelmingly in Hong Kong's district council elections. And, as in Hong Kong, younger Taiwanese were more likely to support the politicians who stood strong for democracy, not a welcome omen for Beijing.

China has now been twice rebuffed in recent months. Chinese people opting for democracy when it's on offer no doubt grates the Communist leadership in Beijing and helps explain their determination to bring Taiwan under their control. The Taiwanese, like the Hong Kongers, want none of it.

at 11:41 am
Email ThisBlogThis!Share to TwitterShare to FacebookShare to Pinterest